As part of my talk I explained the Yin Yang symbol to which I think we are all familiar, but not sure how much its understood.  It is the basic foundation upon which Acupuncture, and traditional Chinese understanding on how the world works is based, it is dynamic. 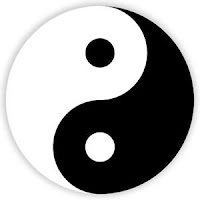 The first thing to consider is that it is a contained circle - that one gets smaller and turns into the other.  It is also important to note that there is a little of one in the other, that they are NOT mutually exclusive.

Chinese characters are essentially pictures of what they are try to describe. The pictogram for Yin Yang shows a mountain.  One side facing the sun, and the other in the shade.

Yang is the bright side of the mountain, whilst yin in the dark and as such, in the very familiar image to the left: yang is white and yin is black.

These things have been categorised as being either predominant in Yin or Yang, but they always have a little of both: for example the front of the body is yang relative to the back, but the upper body is yang compared to the lower body which is yin.

A lovely easy example to understand Yin Yang is to consider 24hours.  Midnight is considered upmost yin (so will be the big bit of the black), noon considered upmost Yang (the biggest white bit) and between is a mix of yin and yang.

What this means for our health.

For me this constant change is what gives us our routines, the fact that we get tired is a result of yang waining and yin increasing as well as explaining many many other patterns found in our bodies.  Women are considered Yin in nature due to the monthly period cycle and our ability to nourish and create life.  As such, Yin declines with age, and menopausal women often show signs of Yin deficiency in that they are overheating, especially at night, as Yin is not subduing Yang, it is incredibly common for women in China to take 'Yin tonics' as they age.

This dynamic way of explaining the workings of us humans allows me to spot patterns in peoples symtoms and help to rebalance their out of sync Yin Yang and thereby optimise health.
Posted by Paula - Acupuncturist at 08:47

Promote Your Page Too